2) It is noted that their boots match the arresting Sûreté du Québec officers perfectly: http://img501.imageshack.us/my.php?image=montebello20aot050highlcv4.png

4) Finally, the truth comes out: http://www.theglobeandmail.com/servlet/story/LAC.20070824.VIDEO24/TPStory/Front

"When we come to chase the monkeys away, we are dressed in trousers and hats, so that we look like men," resident Lucy Njeri told the BBC News website

"But the monkeys can tell the difference and they don't run away from us and point at our breasts. They just ignore us and continue to steal the crops."

In addition to stealing their crops, the monkeys also make sexually explicit gestures at the women, they claim.

"The monkeys grab their breasts, and gesture at us while pointing at their private parts. We are afraid that they will sexually harass us," said Mrs Njeri.


So does this mean that machismo is a virus capable of cross species transmission?
posted by Unknown @ 11:50 AM 0 comments

AJH - I lost your phone number when my phone got stolen.
give me a call
posted by weiss @ 10:37 PM 0 comments

thank Jebus or whom ever you please!
I have been worried like crazy about this ever since I saw the news on the Today show...

I need to send a letter out to Duane.
(if anyone wants to share in the postage, let me know--and if you're not within reach of Chicago, scan/type it and I'll make sure it's in there)
posted by Erini CS @ 11:07 PM 0 comments

Thanks, Meg!
Even though you were not voted into the position of blog-fixer (Not even one vote!), you rose to the occasion. What a true Shoup-er!
posted by julia @ 12:07 PM 1 comments

The people have spoken - the comments are on
the reason we had left them off earlier? - it was generally felt that a more interesting blog would be created if we each took time to craft a post rather than throw up a quickie comment. being that my posts aren't particularly well composed to begin with, I see nothing wrong with commenting.
posted by meg @ 4:48 PM 0 comments

All-comment post
Since we can't yet post comments, I thought I'd just list my responses to a few recent additions, taking it from the back to the front.

Sasha: Excellent Clinton and Obama comic. If only more of the East Coast liberals I used to live among took a moment from their busy schedules of complaining about how people in the Heartland get duped by Republicans to recognize this.

Addendum to Weiss: Rather than let my partner become a drug addict so soon in our marriage, we did buy an air conditioner. I had to haul it up to our fourth-floor apartment and place in the window, on account of his broken arm. I'm worm composting zealously to make up for our environmental impact. Go, little red wigglers, go.

Julia: Cansei de ser sexy sure is awesome. We saw them play at Pitchfork last year. I've rarely seen such energy produced in such heat; they were jumping all over the place in higher-than-90-degree weather.
posted by celestial @ 2:05 PM

The best time-lapse movie yet!
Ever since Kate got a new camera, we've been making looooads of these kinda movies. This past weekend, we went to NYC to celebrate Sue and Andrew's birthdays. This documents our train ride home from coney island, where we all rode the Cyclone. It made us a little "loopy". Cansei de Ser Sexy is awesome.

Oh yeah, and here's another movie from the epic bike trip. We pumped water like this every morning on the canal (although usually without the Balinese gamelan accompaniment).

why can't we comment on posts again?
I think someone explained this three years ago or something but I don't remember the reason. It might be nice, you know...commenting. If we had commenting capabilities I promise to leave such quality comments as: "lol 'taking narcotics' lol" and "You are so hardcore slam-dunk ho-bag! You are the most hard-core biker I know" every week.
posted by Sara @ 4:05 PM

Q: How are you dealing with the heat?

A: K-S and I don't have an air conditioner and despite my horrible whining about the heat we probably won't ever get around to buying one this year. So the heat has been really a problem. Monday morning I wok up at 3am and couldn't get back to sleep until 4am because I felt like I couldn't breathe because of the humidity. I'm actually not sure how I ever did fall back asleep. I considered taking the 300 train and just getting to work ridiculously early.

But I've come up with a great new solution that I'd like to share with you. It's called "taking narcotics." See, I tried to avoid using my prescription because it made me really dizzy and drowsy, and cumulatively so throughout the day so by the evening I could barely stand up. Now I have a bunch left over, and that drowsiness side effect is just what I need! Plus, the narcotic effect slows down my breathing, so the "so humid I can't breathe" feeling doesn't bother me. I only take one a night and I've got a few dozen left, so through the power of modern medicine, I should be able to get through the rest of the summer without air conditioning.

Ooh here comes that drowsiness. Time to lay down now... 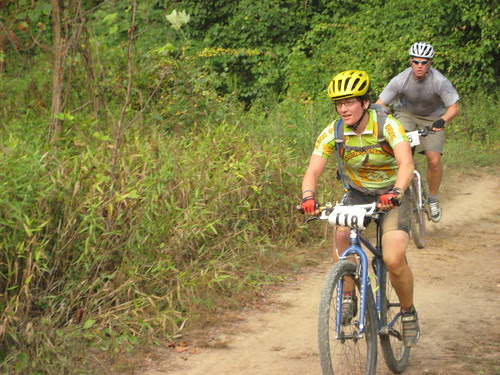 i did my first race since college, and i did it on a single-speed rigid bike. i'm hard-core.
posted by kate @ 11:52 PM

What's in a name? Or 17?
I've always thought it at once impressive and terrifying that my grandmother had 12 children. So, today it caught my eye that an Arkansas woman just had her 17th. The family includes two sets of twins, while my grandmother only had one pair.

I've also always thought it strange but interesting when families coordinate the first letter of their children's names, as my Dad's parents did. Yet I think the Arkansas family, the Duggars, did relatively well in choosing 17 names beginning with J, with the notable exception of "Jinger." Among the best names is "Josiah," though the grand prize goes to the father, Jim Bob. We ought to bring that one back and do away with many of the currently picked names: Hunter, Taylor, Basketweaver.
posted by celestial @ 11:29 AM