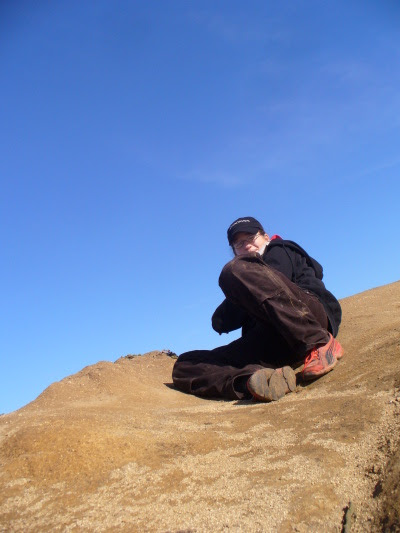 check out our awesome adventure book made with the nifty mac program Pages.
posted by meg @ 3:06 AM 0 comments

To those about to rock in DC, Baltimore and Lancaster, I salute you:

And look forward to joining you for some hot hot hamming

It's FRIDAY!!!!!!
well, at least for me it is. I think for the rest of you it's still monday. The great part of freelancing is that ou can make your own fridays, and today was mine. it's not just any ol' friday. it's my friday for the year! I've decided to take of for san francisco so I won't be tempted to take anymore work with the double pleasure of getting to spend it with the rockin teresa. woo hoo! no more work. it's a feeling akin to the last day of school but no one else is celebrating it with me. so I'm sharing it with my blog friends! everyone take a second to smile with me, thanks!
posted by meg @ 8:04 PM 0 comments

Thursday night I'm trying to sleep and then at 12:15am there's all this noise downstairs in my landlord's apartment. Look out the window and there are about a dozen cops on the sidewalk and going in and out of my landlord's apartment. I go outside to talk to them and they want to look in my place. I let them, and they say that there are "nefarious" things going on downstairs and that they are looking for a guy named Oscar. They look in my closets and tell me that my back door was open. This is a lie, they just want to see what I'll say. They bang around downstairs until 2am.

Friday I call my landlord. She says that the cops broke down her door and put a gun in her face. They had a warrant to search her apartment, and to look for a guy named Oscar, two million dollars cash and some cocaine. The warrant shows her address, so seems like a mistake. Oops.

She called the police department on Friday to ask for an explanation. The police told her that there was no record of any officers at 1627 West 21st on Thursday night. It must have been someone else who broke down her door. She got Telemundo to come out and tape her crying and pointing to the dent in the door and asking "por que?"

Wanger v. Bonner, 621 F.2d 675 (5th Cir. 1980) looks like a kind of similar case awarding damages for the Fourth Amendment violation, except that there the police knew that there was about a one-in-four chance that the address on the warrant would be incorrect, whereas here we don't know why the police had that address on the warrant and what they knew about its reliability.
posted by weiss @ 12:16 AM 0 comments

The TA Interview
For all my past and present TA homies:

Drunk Swiss Rock Stars Sing "We Are the World"


Labels: drunk, rock star, sing, swiss, we are the world

#20
it was slow at work yesterday so i took off early and entered in shop gentei's second ever alley cat. the race was rad. i saw a few cool customers. but as usual for baltimore, there were more hipsters than messengers, so the after party sucked a lot. i came in 1st for girls and won some cash and some lame stussy shwag. i miss dc alleycats. from now on stan is racing with me or i'm not going at all................
posted by kate @ 10:03 PM 0 comments

Mining & Health
The nurses have a show every once in a while on the McGill radio station, and I thought I'd share the latest episode with you. Mining and health! So exciting. I interviewed some community activists from Peru, and my colleague Naomi talked to an occupational health nurse from Cape Breton. We also played a great "Coal Mining Women" song. Oh, and talked smack about asbestos.

So I'm not quite sure what to make of what Gibson is saying in that quote that's on the side panel. (If it's been removed, you can read the interview from which it's excerpted here.) If he's saying that "our grandchildren" will fail to distinguish communications made through computers and information obtained through computers from other sorts of communications or information, well, that's just obvious. The substance of the communication or information is what's important, not its source or form, right? I do have some recollection of my parents back in the mid-'90s suggesting that I confirm with a phone call plans I had made through email, not quite seeming to believe that email communications could mean anything serious, but now they plan things with me through email.

On the other hand, if Gibson means that "our grandchildren" will not see a meaningful distinction between things done in some sort of Second Life-type computer program and done in real life, such as the difference between having your avatar go to a dance club versus actually leaving your house, well, then I just can't agree that anyone could fail to make that distinction. As far as I can see, computer communications mostly just better facilitate non-computer-related life. Or am I missing something profound?

Gibson does make some interesting points about nuclear war, though. And little gadgets. The little gadgets comments are pretty interesting. But while we have all these consumer electronics, but the houses we live in are still pretty much the same as decades ago. We still travel in pretty much the same ways. Tiny computers haven't really changed the nature of our lives. Somehow I'm reminded of the Inca, who developed the wheel and then never used it for anything more than children's toys, though I'm not sure how that analogy quite fits.
posted by weiss @ 10:52 PM 0 comments