What a happy privilege to be able to read what you want!

In my case, it's all about the quality of life of bone marrow transplant caregivers in the hospital setting, which is way understudied. I will do some research on this. Qualitative! And then we will know more about this fascinating issue.

Also: we seem to have switched to the new Blogger. Please label your posts responsibly.

And: pretty awesome pic, Meg. You are clearly serious about killing those bedbugs in your pillow.

Oh man, and then I actually read Meg's posts and I was like "Eww that's gross bed bugs I'm never moving to New York!"
posted by weiss @ 9:49 PM 0 comments

OMG, Shortbus is like the best movie ever. Meg, if you could get me on a steady diet of these sorts of films I'd be with you in NYC b4 2 long. If you're reading this and in Chicago, you should get to the Siskel tomorrow evening. Or come over to my house when it comes out on DVD 'cause I'm gonna buy it and watch it nonstop. The last time I laughed that hard was at Cultural Learnings. And the miniature paper mache New York was enchanting.

Also, I have a prediction for Pitchfork Music Festival 2007: Joanna Newsom. Also that Mike and Stan come out again for it.
posted by weiss @ 8:50 PM 0 comments

Pillow Fights at union square! Someone took this photo of me weilding 2 pillows while atop my friend, joy's, shoulders! It was like a punk moshpit if all the angst and black t-shirts turned to feathers and synthetic fluff.
posted by meg @ 11:44 PM 0 comments

In other news:
# of bedbug attacks in the months
leading up to alleged bedbug
genocide performed by a trained
professional a few days ago: 0

# of attacks since the alleged
genocide: 1

# of those little blood-sucking
bitches of seen and squished
since the alleged bedbug genocide: 3

Recently out my apartment was bombed to get rid of an infestation of bedbugs that's been plaguing the 5th floor since august. I have a theory that the exterminator came and sprayed bedbugs into my room instead of killing them.
posted by meg @ 11:23 PM 0 comments

What is Capitalism?
It is, apparently, all about the "weenies".


Also, until everybody switches over to the Gmail login, the Blogger interface will stay the same. I don't know about login troubles, though. Much like Capitalism, these systems, while benevolent, can be hard to define!
posted by sasha @ 11:43 PM 0 comments

help!
If you've already migrated to the gmail veresion of blogger, you might have found it very difficult to post. I know I can't any more, anyway, one of the original shoupers "owns" the shoup blog and needs to switch it out of the beta version. Kate? Eric? Sasha? someone? help!

I'd like to applaud Katie Ho and Alisa for their recent time spent rocking the city of Chicago, and encourage all of you to come as well.

If being the hog butcher of the world isn't enough to entice you, we also have painted women under the gas lamps luring farm boys!

Carl Sandburg aside, it would be great to see all of you, and sadly I'm too busy with grad school to come to where you live. Unless you live in D.C., in which case I'm coming to town in March.

In conclusion, Chicago is where the Wilco Tower-things are that look like poker chips stacked up, and you should be, too.
posted by celestial @ 6:27 PM 0 comments 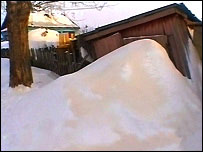 Russia probes smelly orange snow
Russia has flown a team of chemical experts to a Siberian region to find out why smelly, coloured snow has been falling over several towns.

Oily yellow and orange snowflakes fell over an area of more than 1,500sq km (570sq miles) in the Omsk region on Wednesday, Russian officials said.

Chemical tests were under way to determine the cause, they said.

Residents have been advised not to use the snow for household tasks or let animals graze on it.