the library should love me
I've spent over $70 in fines there so far this year. I should be on the list of benefactors. I'm considering netflix as it may be a cheaper option.

those Hartman brothers really get around


How did we miss this? Awesome!

julia and i have and announcement!
we were going to bike across the usa this summer
we even made a post on robinhoodfund to raise money for a new bike for julia.
and i'm impressed to say it's done pretty well with out any promotion (btw, feel free to register and VOTE FOR US!)
a week ago the realization was made that 3 months isn't enough time to bike across the usa, learn french, do an entire semester of graduate readings and start work on a master's thesis.
so we've limited our travels from baltimore to goshen, where we'll catch a ride to traverse city for a schrock family reunion and back and then maybe ride to chicago.
we're inviting any shoupers or foas along
we're probably leaving july 6thish
here's the plan
the cool part is we're mennoniting most of it!
okay, we're going on a walk, more to come...

Chicago
Hey! I'm going to be in Chicago tuesday to visit the Art Institute and see the Symphony... those in the area, would you be interest in meeting for dinner or coffee/tea or something?

Go see a play: make meg happy
This is my friend Chris:

Chris is an actor with the Organic Theater company in Chicago:

Please go see a show and tell Chris hi for me. It should be super awesome and you'll be supporting some great artists. so, apparently since coming to goshen and obtaining a gc mail account... I've saved a shitton of emails...
so while weeding through one of the folders... I found this lovely picture sent to me by Mr. Dyck.

..you know... in late april... say, around the 29th or so... that'd be a great time for people to return to goshen for a visit...
it'd be a good chance to see all us youngin's before we head our separate ways...
As for me, after June/July you may have to hunt me down in Chicago somewhere...

Also, this is a seriously belated and repeated THANKS to everyone who sent me encouraging and loving emails during my manic-depressive* summer working at Cedar Point. (I'd thank others for other various emails, but I've only gotten as far as August 2004...)

*term describes the experience, not Rini's mental state...
posted by Erini CS @ 11:39 AM Times Select
Good news, y'all. The New York Times Select section — a walled-off Internet garden of Eden where Maureen Dowd and Paul Krugman play Adam and Eve and Khoi Vinh is God — is now available to all college students. For free. Sign up now (any old goshen.edu address will work) and drink deeply from the well of ideas...

I Don't Want Health Care If Just Anyone Can Have It

As a concerned citizen, I must voice my adamant disapproval of the "universal health care" proposals we've been hearing so much about. I don't have any gripes with expanding and improving health coverage, per se. It's the "universal" part that irks me. Providing health care for all would completely undermine the whole idea of health care. If every last one of the 40 million uninsured bozos in this country is going to get access to the vast, virtually unnavigable system of medical care we chosen few now enjoy, then I no longer even want it.

I gaffed this elvis perkins music video in December. I think the quality looks like crap and I hope it's just because of youtube. Anyway, this shoot was cool because unlike most music videos where the song is pre recorded and then it's played back for the band to sing along with (so everything syncs up in post), this one was shot live with live sound and 3 cameras. some of the extreme closeups were picked up later and the cigarshop-indian-statue-thing was also done later. it was a small space with not many windows, low celings and 3-cameras, 'twas a bitch to light but we pulled it off in the end. so check out the music video:

There's a new icon in my credits! Yes folks, not only have I earned my art department patch for creating a giant spider web and nearly tying up justin timberlake, but now I've got another paint can next to a feature film! yup, I've left the world of big lights and am currently spending my days making little lights blink on fake control panels, making antique elevators light up and occasionally fixing cords of power tools that the construction boys have cut through.

here's my web. it made it into city magazine 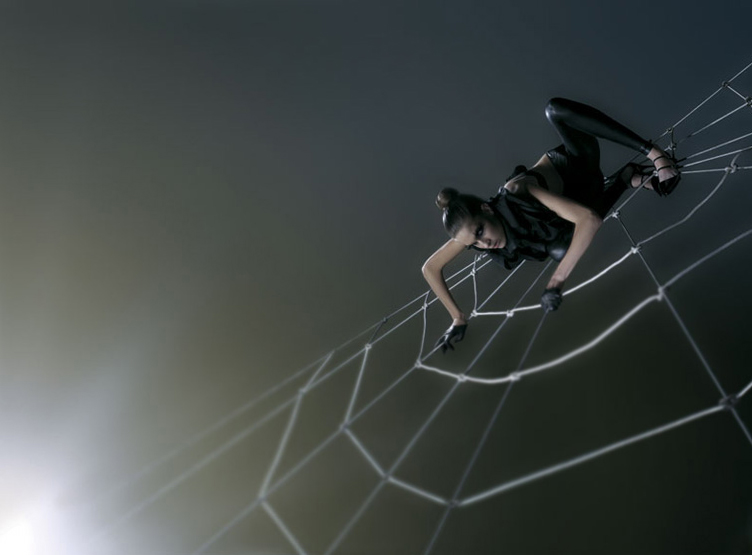 OMG I totally called Girl Talk!! Jesse, you were there on the El. I also am going to go ahead and predict Joanna Newsom. Gotta check w/Angie about whether I can get of work on the Fridat.
posted by weiss @ 11:15 PM

El Perro Del Mar is way cool. I bought the CD, still owe Annie $5. But I liked the live version of "Candy" better because a dude named Bjorn was singing the background vocals rather than some weird female voices. Lakeshore Theater is not so cool. Seats about 300, and who wants seats? But the bartenders were hilariously funny and pushy.Openers were also not so good, except for the one song that sounded like All Mine.

But the real thing this post is about is Lotus and how they are coming to Abbey Pub. Downsides is that Abbey Pub is really far away, but for the chance to do a funny dance and drink in nostalgia I will go. April 7 boys and girls, mark your calendars.

p.s. does anyone live out that way who could pick up tickets at the box office early?
posted by weiss @ 11:00 PM